skip to main | skip to sidebar

Book Bombs at Moore and the Window on Broad 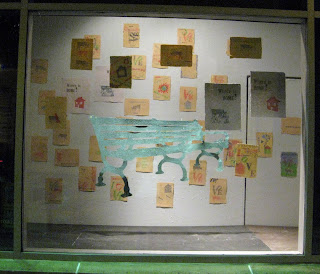 Book Bombs had a crazy and sleep-deprived start to their week yesterday with bombing installations at both the Rosenwald-Wolf Gallery's Window on Broad and the Moore Art Shop. 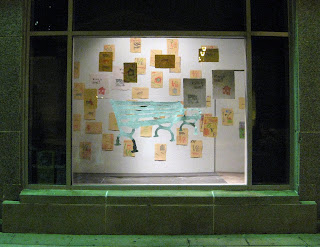 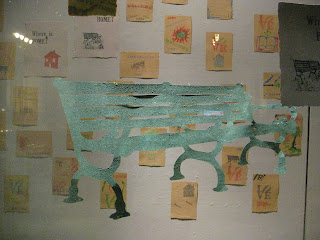 For any of you who will be attending the Gala Opening of PHILAGRAFIKA 2010, please check out our bombing of the Moore Art Shop. And keep your eyes peeled for our second print drop coming the first week of February! 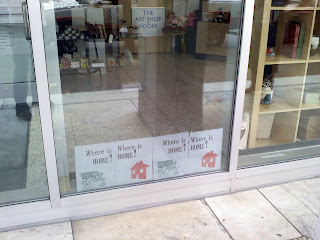 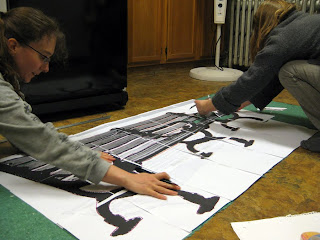 Book Bombs continues to gain momentum. This week, watch for our installation in the Window on Broad, our bombing of the Moore Art Shop (thanks to Katie Van Vliet) and our upcoming second print drop. 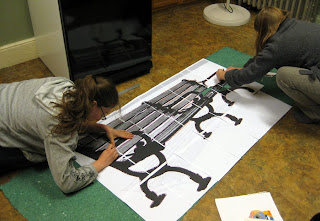 The following weekend is the opening of PHILAGRAFIKA 2010, the international festival celebrating print in contemporary art of which Book Bombs is a part. To learn about other events, activities, and the opening weekend festivities, please visit here.
Posted by Rocinante Press at 4:21 PM No comments:

Book Bombs in the news

Book Bombs has been honored this week with features in a number of news sources. They include Amze Emmons' post to the amazing blog Printeresting, a mention by Peter Crimmins on WHYY, and a short space in A.D. Amorosi's Icepack in the Philadelphia City Paper. Thanks to everyone who has helped us promote our project!
Posted by Rocinante Press at 9:40 AM No comments: 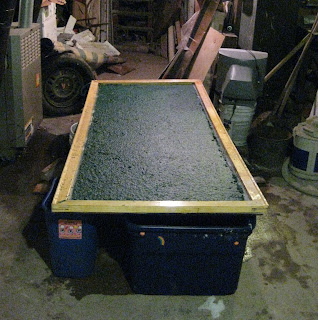 This past weekend, at an undisclosed Philadelphia location, Book Bombs poured the approximately 8' x 3' sheet of paper for our upcoming installation in Rosenwald-Wolf Gallery's Window on Broad. Below are examples of the fibers when wet and dry. 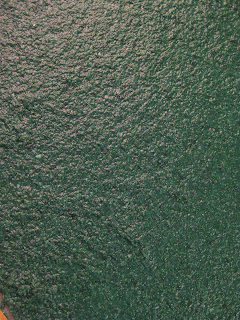 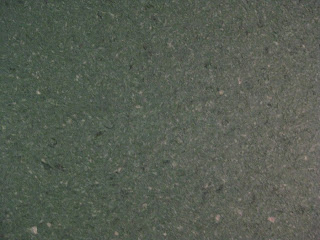 We will be installing in the Window next week -- check back here for images. The Window is located at 333 South Broad Street in Center City, Philadelphia, at the University of the Arts. And don't forget to keep your eyes peeled the first week of February for the next installment in our series of public prints!

As a final note, Book Bombs extends its thanks and appreciation to the magnificent Lori Spencer, who invited us to exhibit in the Window. Thanks so much for thinking of us.
Posted by Rocinante Press at 5:51 AM No comments:

This portrait comes to us from Marianne Bernstein, who was responsible for the Welcome House in Love Park (see October posts).

Beckett’s Estragon and Vladimir, Brothers Karamazov, Cain and Abel, Tom and Dick Smothers, the Marx Brothers all come to mind, but these two brothers prefer to be anonymous.

For the past three years, they’ve been sharing the same bench under the same tree in Independence Park. I sat on their bench last weekend to grasp the view. One hundred year old trees, an expanse of well kept grass and planted beds, plenty of pigeons and squirrels to feed, and a steam vent that keeps them warm when the weather drops suddenly.
Like it did yesterday.

They said you can come talk to us but we don’t want our picture taken.

The brothers have been sleeping outside the past few nights. It’s been so cold that the shelters are over-flooded. Hundreds of people in line waiting for a cot and a meal last night and they wanted none of that.
Bernard morphs into Marlon Brando, quoting lines from On the Waterfront. Were you ever an actor, I asked him? He’s got the Brando voice down perfectly. I wonder if he’s Italian?

Bernard’s Sony radio is working again. A few days ago he told me he had dropped it and it was only playing the Spanish station. His older brother, Bill turned the dial to 134.0 am (Bernard winked and said that number was his brother’s IQ.) Sinatra started crooning. Bill sang along and held my gaze as he sang. But he wasn’t flirting. He’s a Scorpio (I asked him) and I’m married to one. I know those eyes, they burn right through you.
Bernard (the Libra) is the sweet one. He told me people think he looks like Willie Nelson and he does a little. Actually Bill said, I’m the one who looks like Willie Nelson and I thought, yeah, you do too. Of course you both do, you’re brothers. Opposite sides of the same coin.

Hasta la vista baby, sayonara, get the hint—Bill said a few times and it actually hurt my feelings, but I laughed it off. I think he was just trying to test me and didn’t like that I came just to ask about taking their photo.
Bill also told me not to whine, when I said pleeeeezzz.
I apologized. He’s right.

Bill says Bernard is the smart one. B didn’t do well in school and plays dumb, but he’s funny as all get out and likes to play mind games. At one point he answered my question in an odd fashion, and as I was trying to figure out if he was a little crazy.
Bernard said don’t do that, I hate when he does that. He’s just saying the words to a song.

We talked about the squirrels. B said that they come by and beg with their little paws in the air, for scraps of food. Every morning the brothers watch the same squirrel cross Walnut Street and the brothers cover their eyes, wincing, bracing themselves in fear of a car running over him.
Bernard loves animals. There was a cat who came daily and hung out with them and they thought she was a stray until one day her owner came and said her cat doesn’t like to come home anymore because she prefers their company. I asked Bill if he gave her milk. He said, she just eats whatever we’re eating. Which seems to be plenty. Bags of sandwiches that don’t need to be refrigerated because it’s winter.

Bill found a 100 dollar bill last week. He broke it up into 20’s. When I left he said, don’t tell any of the other homeless people that I have money on me.

Bill told me the guy who runs the shelter they stayed at for three months loves to give everyone nicknames. Last year, there was Buddha, Moses, and Jesus. He said Jesus looked just like his namesake, used to be a professor and now spends all his time reading at the Public Library. The brothers have nicknames for passerbyes. Two park rangers who work and walk the beat together, one skinny and one fat- they call number #10. So what’s my nickname going to be? I asked them.

Dorothy, the older one said- and laughed. And Buddy (my dog) is Toto. The two of them laughed hard. You dropped in and transported us somewhere magical. I said I think it’s the other way around.
Posted by Mary Tasillo at 7:52 AM No comments: 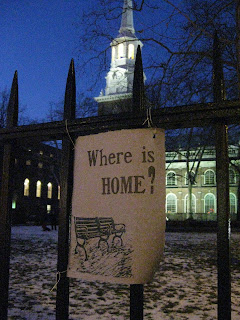 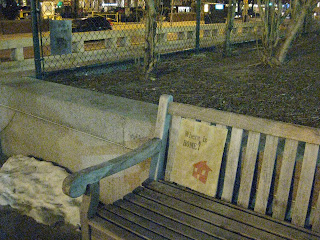 Under the cover of darkness, Book Bombs donned our thermal underwear and struck out for the first print bombing, striking in and around Love Park, Logan Circle, and Christ Church Park. As you happen on these locations, keep your eyes peeled for our prints. More images to come. . . . 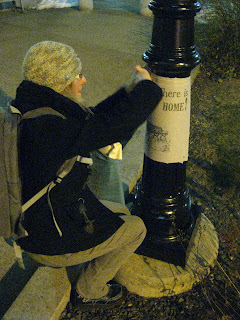 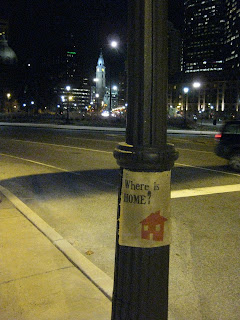 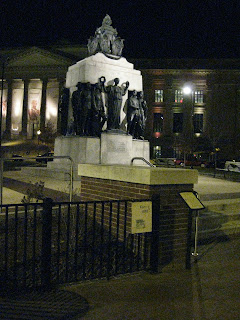 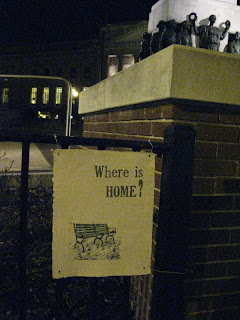 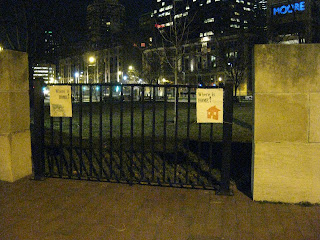 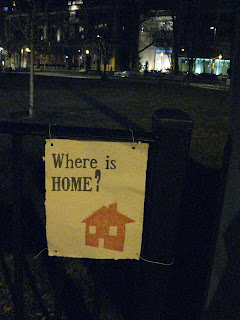 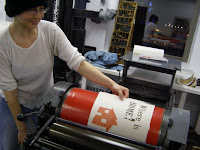 Here they come. On Friday look for Book Bombs prints in Christ Church Park at 2nd and Market, Love Park, and Logan Circle...and possibly popping up in a few other locations as well.
Posted by Mary Tasillo at 10:07 PM No comments:

For more information about this project, email bookbombing@gmail.com or visit www.bookbombs.net.

University of Pennsylvania campus, 34th to 40th and Locust
March 27